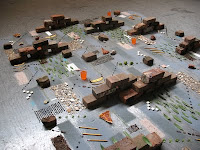 Psy·chom·e·try: (sī-ˈkä-mə-trē), Function: noun, Date: circa 1842. The divination of facts concerning an object or its owner through contact with or proximity to the object.

Right Window is proud to present Psychometry III, curated by D-L Alvarez. Parts one and two of this exhibition, which took place earlier in 2009 in Berlin, investigated a film based on a true story about a pilot who accidentally crashes a passenger plane. After the scattered pieces of the plane are gathered, its salvageable parts are re-used in other airplanes and the guilt-ridden ghost-pilot appears on those flights warning of potential dangers. Psychometry III at Right Window spotlights an artist who was herself something of a ghost in the first two segments, Brenna Murphy.

Based in Oregon, Murphy took part in the earlier Berlin installments of Psychometry, yet, within the physical space of the gallery her contributions were invisible. She sent an oblique instruction via a website (http://bucketfactory.com/ghostofflight401.htm) which another participant, Matthew Lutz-Kinoy, channeled into an assemblage of everyday objects that held true to Murphy’s coded vision. The collaboration, essentially a work by Murphy, was never physically touched by her or even seen by her until its completion—and then only through digital documentation after the fact.

With Right Window’s invitation to host Psychometry III, Murphy will finally materialize and work directly in the space. Her process is one of intuitive ordering, constructing complex patterned arrangements of banal materials. In using objects that are common, familiar, and don’t bare the marks of longtime use, she still succeeds in maintaining a degree of anonymity and challenges a notion of singular authorship. Her work (http://www.flickr.com/photos/brennaaa/sets/72157607099222958/) is grounded in a conviction that the key to accessing metaphysical realms can be found by concentrating closely on the mysterious materiality of coffee mugs and houseplants.

As part of the September 6 opening at Right Window, San Diego-based writer Kim Brauer will read from her work, Passenger Manifesto (A List in Lists), which was also part of Psychometry I. As she compiles lists of seemingly random choices and details of the everyday routines of flight passengers, Brauer vividly memorializes them.
Posted by Right Window at 8:29:00 PM No comments: