Strain Andromeda The: The Paintings 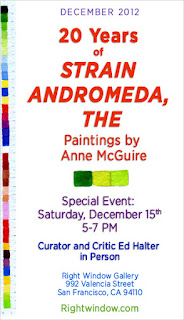 A LECTURE ON ANNE MCGUIRE’S STRAIN ANDROMEDA, THE

In conjunction with Right Window Gallery’s current exhibition of new paintings from the Square Spiral Series by Anne McGuire, please join in celebrating the 20 year anniversary of her Strain Andromeda, The with a lecture by critic and curator Ed Halter.

The exhibition is on view, by appointment, throughout December.

“Anne McGuire’s Strain Andromeda, The is undoubtedly one of the greatest works of experimental cinema made in the last quarter century. Completed at the tail-end of the analog era, Strain was painstakingly edited on a linear tape-to-tape system by McGuire, using a commercial-release VHS release as its source. The result consists of each shot of Wise’s 1971 feature The Andromeda Strain presented in backwards order, opening with the film’s end titles and continuing forward towards the beginning. But this reversed retelling is no mere conceptual conceit: Over a span of two hours, the work’s involuted rhythms relentlessly communicate the painstaking labor that went into its creation. It continuously jams the viewer’s normal understanding of causality, releasing each moment to float alone in a vertiginous chasm of unhinged time. In this schizophrenic reverie, the glowing, pulsing surface details of Wise’s original gain a new intensity. By Strain’s end, the effect is virtually psychoactive; expect its spectators to stumble out of the theater, their inner clocks momentarily discombobulated.” - Ed Halter

“The square spirals come from a state of mind, not unlike the state of mind contained in the backwards edit, its creation, and effect —each piece of color is an edit. But each square spiral is a movie you can see all at once. It's all there - defying time.” Anne McGuire on the Square Spiral Series

About Anne McGuire
Anne was born in the Valley of the Jolly Green Giant, and has lived in San Francisco since the 90s. In Fall 2004, she relocated to Busan, South Korea, where she taught video art at KyungSung University for eighteen months. Prior to this she taught at the San Francisco Art Institute, University of California Santa Cruz, and Stanford University. Anne started making videos while a student. Her single channel works are much in the tradition of personal/poetical performance to camera, playing off of the conventions of television. She has explored the personal through formal narrative, particularly in Strain Andromeda, The, her first foray into disaster deconstruction. In 2006 Anne completed Adventure Poseidon, The (The Unsinking of My Ship), which celebrates the 20-year anniversary of her very own real-life shipwreck experience. She also writes poems and sings them as songs, and has performed as Freddy McGuire with San Francisco-based electronic musician Wobbly, live and on radio.

About Ed Halter
Ed Halter is a critic and curator living in New York City. He is a founder and director of Light Industry, a venue for film and electronic art in Brooklyn, New York, and his writing has appeared in Artforum, The Believer, Bookforum, Cinema Scope, frieze, Little Joe, Mousse, Rhizome, Triple Canopy, the Village Voice and elsewhere. From 1995 to 2005, he programmed and oversaw the New York Underground Film Festival, and he has curated screenings and exhibitions at Artists Space, BAM, the Flaherty Film Seminar, the ICA, London, the Museum of Modern Art, the New Museum, PARTICIPANT INC., and Tate Modern, as well as the cinema for Greater New York 2010 at MoMA PS1 and the film and video program for the 2012 Whitney Biennial. He teaches in the Film and Electronic Arts department at Bard College, and is currently writing a critical history of contemporary experimental cinema in America.