Cecilia Dougherty - In a Station, Petals 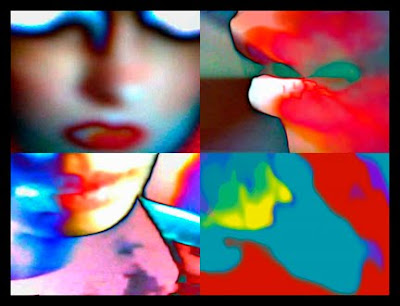 Right Window. People ask me, "What are we seeing" when they watch your new video installation presented at Right Window, "In a Station, Petals." It seems to pop right out of the box of windows onto Valencia Street, but it's a curious mix of abstraction and figuration.

Cecilia Dougherty. We’re seeing the fragments of television. In some scenes I found beauty and in others somewhat too overt expressions of emotion. For me they seemed to assemble and dissemble a narrative. I chose to focus on the beauty, letting the narrative go its own way, and therefore abstracted the images to a point between beautiful and awful.

Right Window. Where were you when you collected the materials for “In a Station, Petals,” and where were you when you molded them to their present form? It is a video that continually returns to the things of this earth, while suggesting an alternate reality shimmering right behind the one we know.

Cecilia Dougherty. I was in my bedroom, on my bed, while collecting most of the images. Possibly I collected all of the images from my bed. Then I went to my studio (front of the apartment—quite far from the bedroom) and did the most meticulous editing to get each image in good form and to put them in order and apply a few effects to each one (like putting on make-up). The piece wasn’t finished when I came to San Francisco, so I did the last of the editing at my friend Nancy’s apartment in Diamond Heights.

Re the continual returning to the things of the earth, this is a very nice thing to say. If that is true, then that part of it was done in San Francisco—it must have to do with the pacing, which is the last thing I worked on.

[Later.] I was thinking about your question about where I was when I got the images for my video and realized you must have meant where were the images when i got them. I said I was in bed! which is true, but maybe I should have said that I got them from watching tv shows online, playing with my cell phone’s camera (an old one, a relic) and holding it up to the screen while the image was paused so I could capture parts of the frame. the tv shows were: breaking bad, kings, combat hospital, royal pains, bones, fringe, a show about the friend of one of the royal pains stars getting a make-over, and a t-mobile commercial. There are others I forgot, but that covers most of the images.

The part about editing? in my studio? all true.

Right Window. You're an international artist and you live in NYC, but presenting your show in San Francisco has something of a homecoming feel to it.

Cecilia Dougherty. I feel at home in San Francisco, since this is where I learned to do everything—love, art, fucking up, thinking, reading, taking photographs, etc. This time around, I had no expectations of what the city could offer me and so had many excellent experiences while here.

Right Window. What are your upcoming projects, Cecilia?

Cecilia Dougherty. I'm working a 3-D video pretty much for the hell of it, and would like to do another longer story using a script and actors—I have a book in mind to interpret as a video, but haven't finished discussion with the author, so best to wait until I get started before talking about it. I also want to create a large-scale projection onto the Pirelli Tire Building in New Haven, CT. The landmark building was designed by Marcel Breuer in the late 1960s but sits, unused, in the middle of the Ikea parking lot. He also designed the Whitney Museum, btw.